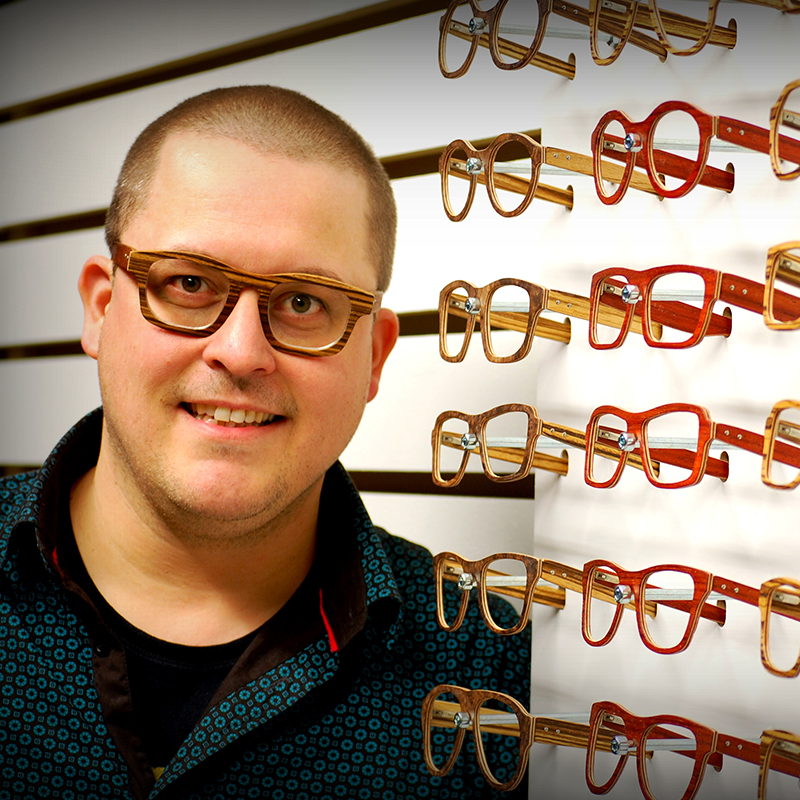 The owner and designer of Jefferson Eyewear is Gerd Booten. A fierce craftsman, who has an eye for his customers as well as his Limburgian (NL) roots. As a result, every frame is named after a specific town in Limburg.

Gerd is every inch a music lover, too. Therefore, his designs often possess a musical element. And did you know that the name Jefferson Eyewear was based on the American rock band Jefferson Airplane?

I’m Gerd Booten from the Netherlands and I make Jefferson Eyewear, handmade wooden glasses.
It’s the first ever brand to make glasses from drum shells and cymbals.
In 1994 I started my career as a carpenter and worked in wood till 2003 when I made the switch to optics. Here I work as technician, I repair frames and put optical lenses in the glasses. In September 2011 I was at an optical show in Paris together with my boss. There I saw a brand that made shades from skateboards. I told my boss I could make that to, he said I couldn’t…..and there you have it. A brand-new project had started. Within a week I showed him the first “frame” made from some plywood I had at home. A two-year long journey of trying, research, trying more and so on was on its way to figure out how to make wooden glasses.
After working a lot with skateboards, my eye fell on my double bass of my drumkit. I thought the curve of the bass could be good to fit in front of a face. But was I going to cut up a part of my instrument? We’ll, there was only one way to find out, so I did. And with success. The result was way better then I got from skateboards. I made a press mould to make my own shell parts and started buying some veneer. This was a big turning point in my project.
I made the first small collection of glasses and put them in our shop. A colleague optician put them in his store as well and with him the magic started. He is friends with Belgian tennis player Kim Clijsters. She had to play a friendly tennis tournament for Sir Elton John and his aids foundation. Kim wanted to give Sir Elton an original present and she called me. Within a couple of weeks, I made three sunglasses in a beautiful box for Kim to give to Sir Elton. He was so happy with the glasses that he wrote me a letter. This triggered a lot of press, newspapers, radio shows, TV stations, glossy’s. My story was told everywhere in the Netherlands and Belgium.
I contacted people in the drum world. I got veneer material from DW-Drums and after a while I got the chance to meet Thomas Lang, one of the best drummers in the world. Thomas was the first artist to have a signature model. He got me to LA to visit the 2017 NAMM show where he introduced me to several people. Now the signature collection contains names as Aquiles Priester, Eric Hernandez (Bruno Mars), Benny Greb, Michael Schack (Netsky), Karl Brazil (Robbie Williams, Ed Sheeran), Blaudzun, Marco Minneman and Mike Dolbear. Now I get material from several factories like DW, Sonor and British Drum CO.
The story continues…